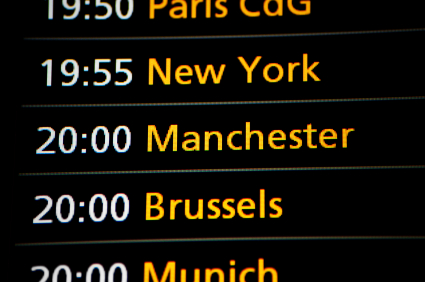 Walking into Terminal One at Manchester Airport is a little daunting. Not least, finding that most of the cafes and restaurants are actually in the departure lounge so somewhere for a quick meeting on the landside is slightly problematic, also the ceiling on the ground floor entrance of terminal 1 is extremely low. Now what does that matter? I hear you ask. Well even for someone my height I had an overwhelming sensation that I either needed to duck or get out as quickly as possible.

Thankfully, Joe’s Kitchen was right there, just opposite Boots the chemist, and with a slightly less clinical low flying ceiling making a more conducive atmosphere to relaxing and discussing business.

In fact, a number of the tables were already filled with business colleagues who were deep in conversation or work related activities when I visited.  Out of the three restaurants on the ‘landside’ arrivals and check in on the ground floor, this appeared the best at catering for executive travel needs.

The menu featured several options, marked with a heart symbol and an indication of calorie content.  Alas no other nutritional information was supplied.  Although surprisingly, there no words of ‘lean, healthy or good for you’ in sight as other caterers have been tempted to include. Unlike other chain restaurants who dominate in so many airports, this one appears to have a chef with some inspiration and creativity towards the provision of healthier options.

At the top of the menu under Joe’s favourites, which according to ‘Joe’ were ‘comforting grub, sure to fill you up and make you smile!, were two ‘healthier options’. The first being Grilled Herby Chicken with only 450 calories if you choose it served with just lemon. This comes served with brown basmati rice and wilted spinach, both of which add fibre and a variety of nutrients such as iron, vitamin C, Niacin, thiamine Beta-carotene, zinc and potassium. There is also a choice of either house garlic or herb butter if you desire additional energy in the form of fat (not included in the 450 calories). The second option was Lentil and Spinach Cottage Pie, again at 450 calories, which also looked nutrient dense.  Lentils are particularly good sources of soluble fibre which might help to lower blood cholesterol, as well as having a high satiety value and low energy density. This is why they are generally recommended for countering some chronic health conditions. They are also a good source of many amino acids, although limited in two which are indispensable to our bodies, and subsequently often used as a preferred protein source for vegetarian based diets. The other ingredients listed included chickpeas, aubergine, cherry tomatoes, ragu sauce, topped with glazed parsnip and carrot mash.

Menu options not highlighted by a heart symbol and energy value, included Joe’s Homemade Burger, Chicken Burger, Freshly Battered Fish, Beef Chilli Bowl, Sausages & Mash and Ham Hock Cake. Every one of which, regardless of cooking method, appears to include fresh herbs and a combination of nutrient rich fresh produce.

Further down the menu under pasta, there was another ‘healthier’ choice indicated, ‘Spaghetti, Cherry Tomatoes and Basil’ at only 525 calories. The drizzle of olive oil and Italian hard cheese not only added a few extra calories, but also a little more taste and additional nutrients at little expense of health. Those requiring less energy could always request to hold the olive oil and add the cheese themselves if so desired.

Under salads was a fourth choice of ‘Spinach Salad’ at 450 calories which comprised of mixed mushrooms, roasted yellow and red peppers, avocado, tomatoes, artichoke, croutons & roasted pine nuts and of course spinach. Easy to see that this was packed full of goodness. Joe’s house dressing topped the salad, but there was little to indicate what Joe’s dressing comprised. I’m assuming it was included in the total energy content, but you can always reduce the calorific value by requesting for it to be served on the side and adding it as wished.

Lastly, one option which would make my husband chuckle with delight was the Fish Finger Sandwich at 575 calories, served with gem lettuce, tartar sauce and a pot of tomato ketchup. I wish he was with me now so I can see his face as it’s not every day a childhood favourite becomes not only socially acceptable but also indicative of something that might be of some value.

Sadly, there were no appetisers or desserts indicated with a symbol and energy value. This is probably where Joe’s Kitchen is missing a trick or two. As had they also included a starter or dessert in the options highlighted on their menu then they would be likely to increase the purchases of such items as customers tend to mix and match, or save and swap the options with energy values attached.

Fortunately when the delightful waitress came over to take my order, I choose not only the Lentil and Spinach Cottage Pie, but also at her prompting a starter of Avocado, Tomato Salsa and Hummus on Sourdough. The combination of sour dough topped with hummus, avocado, cherry tomato salsa and mixed seeds, with herb proved to be a great choice as it was extremely fresh, fabulous tasting and full of nutrients.

Equally the cottage pie was a good choice for similar reasons. However, the combination of the two items were extremely filling and with the vegetable of peas and mange tout with butter served on the side of the cottage pie (which I’m sure must have been additional energy), I simply couldn’t finish the meal. Talk about satiety value!

I’m thankful that as a customer I am served innovative, fresh, nutritious food, which unlike many other airport competitor chains was satisfying to the extreme.