Notices in the chic Duty Free shops are in the languages of the customers, German, but also Chinese, Russian and English. 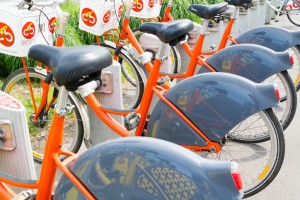 Transport to and from the airport to the city centre is reasonably priced; I opted for the €8 airport bus, which took 20 minutes, terminating at Schwedenplatz.  The train would be more suitable for destinations near the Hauptbahnhof and cost €12.

Comprehensive public transportation makes Vienna a relatively effortless business destination.  The trams and U-Bahn work well, a €10.80 72 hour travel pass got me tram/train/bus travel throughout the city.  Vienna is topographically flat, ideal for cyclists; dedicated cycle lanes keep the traffic and pedestrians apart, on the whole.  The city is fairly compact, and in the right weather, it’s nice to join the locals on foot, pedestrian crossings are numerous, although a wary eye for rogue cyclists is always advisable.  The U-Bahn entrance shows a long list behaviour prohibited on trains and in stations, and as a result, you don’t see any buskers or beggars on the public transport system in Vienna, even in freezing weather.

English is the language of business. 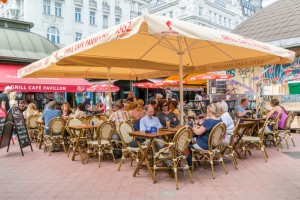 Austria is a hub between many nations with many languages, but as usual, English is the common language reverted to for most of them.  It makes it particularly easy for native English speakers doing business abroad.  It was rare in Vienna to not be able to communicate in English.

‘Smoke gets in your eyes’ – and clothes and hair!

Non-smoking venues is a contentious issue in Austria, most bars and restaurants still allow customers to smoke inside.  Cafes often have a smoking and non-smoking section and restaurants too. Unfortunately, having become accustomed to no longer smelling and inhaling cigarette smoke, I found it unpleasant.  I researched a chic wine bar which specialised in Austrian wine only to find that every table had patrons smoking.  My colleagues and I had to find another venue.  Similarly, in a typical Austrian restaurant, we had to dine in the basement non-smoking area while the smokers ate in a segregated area of the main restaurant, where the smell of great food was masked by the smell of ash trays.  Many less traditional restaurants did have a non-smoking policy. 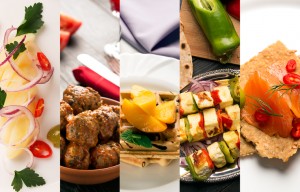 I’d heard that Vienna has some of the best Italian food outside Italy, but I also found excellent Spanish and Korean.   Given a longer visit, I could have worked my way around the cuisines of the world.  If business negotiations require casual conversations over excellent food, Vienna is a great city to do business.

Vienna has an element of the flux existing in Europe today.  There are many forward-looking exciting aspects which make it a great place to do business, while a less progressive attitude also exists.