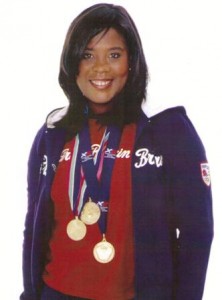 Prior to this, her list of achievements include presenting the Sky Sport News, along with various presenting roles for BBC, ITV, Bloomberg, GMTV, including covering the 1996 Olympics from Atlanta. Tessa continues to present on occasions and is often engaged as a motivational speaker, regularly speaking at business and sporting events.

Tessa remains actively involved with aspiring Olympic athletes through her own sports foundation and academy (Tessa Sanderson Foundation and Academy).

She currently works with companies, local authorities, sports governing bodies and educational institutes to provide a range of sporting, educational and business based programmes.

She is a frequent traveller, both internationally and nationally, travelling often to support her various athletes, corporate clients and various speaker engagements, offering top tips on leadership, management and team work, in addition to coaching and mentoring young talented athletes.

Tessa was awarded an MBE in 1985 for her Olympic Gold Medal for Great Britain, OBE in 1997 for her work with various charities, and a CBE in 2004 for recognition of her services to sport.   In addition she holds an honorary Masters degree from Birmingham University, along with two honorary Fellowship degrees from South Bank University and from Wolverhampton Polytechnic.

Tessa loves working with new challenges.  In 2005 she was appointed to start a new sporting programme to find grassroots talented youngsters to complete in the 2012 Olympic Games.  In 2009 Tessa conceived the Newham Classic 10 K run through the Olympic park arena with sponsorship from various local and international companies.  She continues to take on new challenges and is currently working on reopening sporting facilities and opening up new opportunities for youngsters in sport, as well as various events for corporates and raising awareness for sporting grass root initiatives.