The popularity of non-dairy milk drinks has increased along with the trend for many people, towards a plant-based diet.  According to the market research company Mintel, sales in non-dairy milk substitutes have increased by 30% since 2015 and the most popular supermarket purchase is the almond drink.  But what about the choice of milk substitutes when we travel for business?

What’s In A Name? 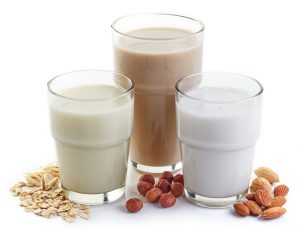 Milk is generally defined as a: white liquid nutrient-rich food produced by the mammary glands of mammals – so not soya beans or almonds!  I’m going to use ‘milk substitutes’ when referring to plant-based, non-dairy drinks.

Lactose intolerant?  Allergic to milk proteins?  Vegan/gravitating towards a plant-based diet? Just enjoying the taste? All are reasons that we might want to use a plant-based milk substitute.  From a nutritional perspective, dairy milk is generally a little higher in protein.  However, most quality milk substitutes add vitamins and minerals to give similar concentrations to those in dairy milk, around 120mg calcium per 100ml is fairly standard, and useful amounts of vitamin D, riboflavin, B12 and Iodine are usually added.

What Is Available When We Travel For Business?

Many of us, including myself, have become accustomed to tasty milk substitutes in our breakfast porridge, smoothies or drinks.  Can we get the same variety away from home? 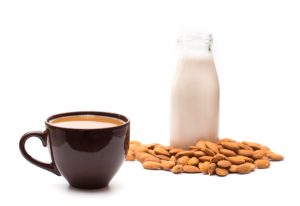 Generally speaking, the fancier the café the more likely it is to stock a range of milk substitutes.  Most cafés stock at least one alternative to dairy milk, Starbucks excels with soya, coconut, almond or oat drinks.  Even where the competitive pricing is paramount, there is usually a non-dairy option, for example, Greggs provides a soya drink for their Fairtrade coffee.  I could find no mention of milk substitute availability in the fast food burger outlets.

On the move, it becomes more difficult, but not impossible.

Airlines have been offering vegan meals for some time, but on their websites, I can’t find details of milk substitutes offered.  Presumably, a non-dairy meal would come with a non-dairy drink.  As always, it can be a good idea to carry our own drinks and snacks with us on-board, if there is a risk that our dietary requirements won’t be catered for.  The 100ml liquid limit has to be adhered to which makes carriage trickier and a vessel that won’t leak under the cabin pressure is vital.

Picking up a drink from the station café is the best way to ensure getting a hot drink with a good choice of milk substitutes, particularly on shorter routes.  Small soy drink pots are available on Virgin Trains (and presumably LNER) and Eurostar.  Eurostar also offers a vegan breakfast option.  Bringing provisions from home or buying a porridge or snack before boarding would be the best option for most train travel.

My Belief is that:

Small details, like a comforting hot drink, as close as possible to the drink we would enjoy at home, ease the stress of business travel.

Want to take some non-dairy options with you?  Here are some products which can get through security that you might like to try.