Birmingham International Airport offers a number of challenges for the business person, of which finding tasty, nutritious, yet low calorie options is one.  Not because there isn’t any, but simply because they are few per venue/eatery and comprise little to excite.

In saying this, a number of restaurants and cafes are now offering ‘lighter options’ marked on their menu.  Although it is an old concept, it is a concept still yet to mature in the UK, where other countries appear to be more practised in the art of tasty, healthier cuisine.

Let’s just say, it’s rather on the slim-side.

My recent trip to Birmingham International Airport found me at Frankie and Bennys (F&B). 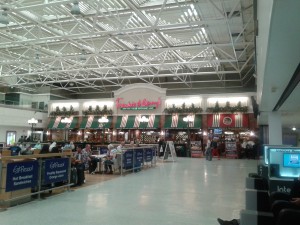 It was well situated in the airport, and one of few which were conducive to conducting business either mobile working or with a colleague.

Frankie and Benny’s menu offered ‘lighter options’ where there is a symbol accompanied by calories on the menu, with an explanation of “all marked up main dishes are not only utterly delicious but are 650 calories or less.  We have also developed a range of suitable starters and desserts to complement them at 300 calories or less each” at the bottom of the menu.

In time, they might offer more choice.  But at the moment, there are two starters comprising tomato soup or tomato and red onion salad.   Generally speaking most tomato based dishes are a safe bet, as are salad and soup, unless fat or oil has been added unduly.  At F&B the vegetable soup was only 150 calories and the salad 170 calories.

Slim pickings, but suitable for a starter if colleagues were having a starter and you wish to join in, or if one simply wanted the satisfaction and satiety effect.  Personaly, I would rather save the calories or opt for a more appetising main.  Logically, however sales will increase by at least 40% on the starter items or dessert items which are marked low calorie as we tend to become human calculators adding up calories on the menu to meet our energy restrictions/requirements or ‘saving’ them to use as a swap for a glass of wine or desert.

Speaking of mains, there was a little more choice but you won’t be awarded any prizes for guessing which may be marked as low calorie.  Typically spaghetti with seafood is a good bet unless the chef adds a liberal dose of olive oil.  Rest assured the Spaghetti Ocean of Frankie & Bennys is only 430 calories.  And some effort has gone to provide a light Spaghetti Bolognese, served with salad.  Although I couldn’t help wonder if that was a partial meal replacement rather than an additional item.  I decided to move on to the other options rather than test which way the combination worked.

Two pizzas were highlighted, although one was at the maximum of the ‘lighter option’ criteria of 650 and the other 635 calories.  Three questions arose at this point.  Since when does 650 calories constitute a light option?  Secondly, how do restaurants select their own criteria for ‘lighter’ i.e. is it light in calories and in fat?  Lastly, if the ‘lighter’ option is the lowest calorie pizza option on the menu, then what are the other options calorific values?  Maybe, ‘lighter’ should read ‘normal’ or ‘best’ and/or the others ‘high’ or ‘worse’.

If pizza at 635 or 650 calories isn’t to your fancy then there are two more options for you to choose from.  Yet another salad but this time with grilled meat on the side.  Either a citrus chicken salad at 350 calories, but virtually no, if any, carbohydrate (although I was offered garlic bread!), just simply sheer protein and salad vegetables, or a 6 oz sirloin steak and salad, again no carbohydrate based food to accompany.

Although I wasn’t surprised the burgers, hotdogs and deep filled calzone didn’t appear to produce any natural contenders, I was a little surprised that none of the sandwiches or wraps included a ‘lighter option’ of less than 650 calories. 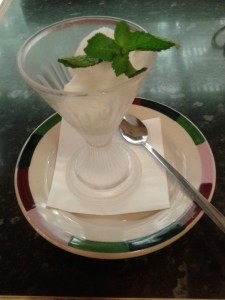 Slim pickings again I’m afraid, as I found out when the dessert menu arrived.  I could choose either between lemon (very lemon, as I discovered) or mango sorbet.  Well no surprises there.  Exactly what one would probably choose if watching their calorific intake and there were no symbols or calories on the menu.  If it hadn’t been lunch time, I probably would have saved the calories for a drink in despair.

For any new restaurant offering healthier options/information on the menu, it would be great if you could provide us with a little more imagination than a few calorie markings on the commonly low calorie options.