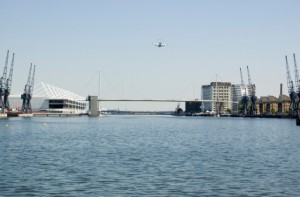 Visiting London City Airport is always a delight.  It’s well known for being quick, clean and friendly.  There are two restaurants (Panopolis and Pret A Manger) land side within the airport and a third en route if you include the Costa Coffee located between the Docklands Light Railway station and the airport’s entrance for you to choose from prior to security.

On this occasion, I decided to try out Panopolis restaurant, situated in the arrivals area on the ground floor immediately past the self-check-in machines, having mentioned it in a previous blog featuring their ‘take on board’ picnic pack.

From a business executive perspective, there was plenty to choose from, staff efficient and welcoming and the pace of service was quick with little queuing.  To begin with, I encountered the ‘drinks bar’ where a selection of waters, soft drinks and alcoholic beverages were chilling in an open fridge.  I decided to pass on the purchasing of water as it was expensively priced for a 500ml bottle of still water at £2.20 and you can purchase it for much less elsewhere, for example from WHSmith for only £1.79 directly opposite.  I opted for a hot drink instead.

The first menu item offered on the main counter was a hot dog with fried onions and sauce with ½ pint lager, all for £7.95.  Not wanting to indulge in a fast food type takeaway, I moved quickly to explore the baguette options.

All ingredients were fresh and baguettes had apparently been baked on the premises and everything looked very inviting to a busy traveller.  Yet it was difficult to choose something that would be low in calories, fat and salt with filling options that only included goats cheese and roasted peppers (I assume roasted in oil of some description), roast chicken and chorizo melt, a New Yorker, roast chicken club and Croque Monsieur.   All very reasonably priced, but not what I would call light enough to warrant a comfortable flight within the hour.

In contrast, on the blackboard, there were hot baked potatoes with various fillings.  I could see the potatoes baking but it was difficult to quickly ascertain which fillings were available without asking.  Nor could I see any price listed.  But I could see a price for a bacon butty at £5.00.  However, for the reasons already given above, I decided to also avoid this option.

After reviewing the selection of pastries, muffins and carrot cake on the top of the counter immediately in front of me, and swiftly swinging around to view the pick and mix selection of sweets opposite the counter would have been tempting to a more vulnerable traveller, I decided to quickly review the remaining desserts to see if anything else could possibly tempt me.  From the array of options, I explored the pots of fruit salad which came in two sizes at £3.50 for the small pot and £4.70 for a larger pot.  Then from the corner of my eye, I spotted a basket of individual fruit.  Eighty pence each!  What a shame they were last on the counter when most items for a meal would have already been selected en route.  Could this be a product placement versus price (profit margin) tactic I wondered?

Finally, I spotted the salads further down from the counter at eye level.  I’m not normally a person to opt for salad at lunchtime unless in a hot climate, but I decided this was the best option I could find, and opted for the seafood and egg salad, comprising a handful of prawns, a couple slices of smoked salmon and an egg sliced up all placed on a pile of ‘older’ looking rocket leaves.  Served with a chunk of lemon/lemon wedges and cocktail sauce in a separate pot, the overall dish didn’t appear to add a lot of sustenance to my afternoon.  Other salads included Chicken Chasseur and Greek looking (feta and cucumber).

I concluded after testing driving, that although the salad was possibly reasonable in nutrients such as vitamin D, magnesium, iodine and vitamin C , and without adding the mayonnaise which I replaced with a squeeze of lemon, this salad would be suitable as a restricted calorie diet/slimming.  However, it fails to offer any form of carbohydrate, which also provides a good source of fibre and various other nutrients, along with sufficient energy for a busy afternoon schedule.  It’s a toss up really – a high protein option, low in carbohydrate and energy, or a balanced approach with the addition of a roll or slice or two of bread.  Personally, I would prefer to feel physically and psychologically full enough to know I had given my body a balanced yet light lunch so as to avoid the need to snack again so soon.

However, it fails to offer any form of carbohydrate, which also provides a good source of fibre and various other nutrients, along with sufficient energy for a busy afternoon schedule.  It’s a toss up really – a high protein option, low in carbohydrate and energy, or a balanced approach with the addition of a roll or slice or two of bread.  Personally, I would prefer to feel physically and psychologically full enough to know I had given my body a balanced yet light lunch so as to avoid the need to snack again so soon.  Unless of course, this is your snack option!

So if you are flying and stop in at Panopolis, the best healthiest lunch choices appear to be the salads with an addition of a roll or baguette.