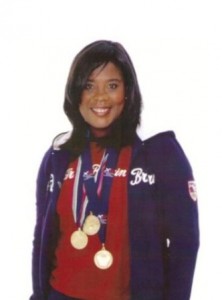 Tessa Sanderson, CBE, Non Executive Director, TSFA, former Olympic Champion, business speaker and TV presenter has travelled the globe to represent the United Kingdom and on business.  She now represents her own Foundation which inspires potential Olympic athletes from grass roots to elite status with top national and international coaches, and in doing so she frequently travels nationally and when necessary internationally.

When travelling long haul, she keeps herself supple with a few simple movements to help blood flow and reduce the risk of DVT.   Tessa wants to share her supple secrets with other business executives on the move so to support their performance and long term health as well.

What are you doing now?

I am now on my way to Carlisle for an after dinner speaking engagement for the Association of Engineers where I will be conducting a motivational speech for over 200 guests.  The journey is taking 3 hours by Train Virgin 1st Class which is not so bad.

What was the last trip overseas you took?

The last trip overseas was to Malta for a wedding weekend and a break with my hubby.

What international ‘business’ travel do you generally undertake?

I use to travel a lot with my athletes when I was a sole management organiser but now I head up the Foundation and the travelling to competition with the athletes is now mainly done with the coaches who train them.  I still travel a lot up and down the country doing speaking engagements and meetings to secure possibilities and explore new areas for the Foundation.

I enjoy travelling and some of the more memorable trips remind me of how much I do enjoy the opportunities my life has brought.  In 2010 I travelled to New York and San Francisco, albeit it was my honeymoon! I managed to combine it with some work where I met up with a few people who wanted to travel to Britain and to explore working with the Foundation.

In 2011 I really enjoyed my trip to France (Paris) for the British French Open judo championships to which my hubby is IJF (International Judo Federation) Technical Director of the sport.  This gave me the opportunity to see how the sport was run and see what possibilities there would be for some of the members of the Foundation and what standard they would need to achieve.  This level was higher than I could have imagined with some of the best including Teddy Riner, Olympic Gold medallist and the best judo athlete in the world, representing France.  Teddy went on to win in London 2012 Olympic and Paralympic Games.

Equally a pleasure was in 2011 when I was asked to return to Jamaica my Motherland to speak as Guest of Honour and present their sports personality of the year awards.  The awards went to Usain Bolt the 3 times World record holder and the fastest man ever on two legs in athletics and Veronica Campbell Brown who was also double Olympic individual gold medallist.  Both athletes went on to compete in the London 2012 which was dominated by Usain Bolt.

How often would you travel internationally?

I always travel by flying when I go internationally.  However on some of the occasions that I have been to France I used the Eurostar, but generally I like to get to my destinations quickly as possible.  At the moment, I’m travelling about once or twice yearly but only if it’s really important as I now have a very young family which takes up a lot of time….

What are your ‘usual’ destinations?

My usual destinations  in the last 7 years have been Jamaica, mainly because my mother is a retired Jamaican who has returned home to live, and also places like, France, Holland and USA. I am now opting for the short distances as many other places I was lucky to have visited when I was competing.  I would still like to visit Saudi Arabia and South Africa…perhaps this year.

Clearly as someone who wants to prevent DVT, what do you do to reduce the risk of DVT?

One of the things as an athlete that I do to combat DVT personally is take a small amount of salt on my meals as sometimes the body of an athlete becomes depleted of salt which can create cramping in the muscles.  I also ensure that I drink a lot of natural still water to keep the body from dehydrating when I am on a long haul. I always try not to consume any fizzy drinks and perhaps a glass of wine in moderation on long journeys. I always try to select the healthiest food on the flight list such as chicken, rice, or salads to keep nurturing and feeding the muscles to help with blood flow and I never eat too much bread with butter on flights.

I use a number of exercises which works for me whenever I have to go on a long haul (4-6hrs).

Until the next time bye bye