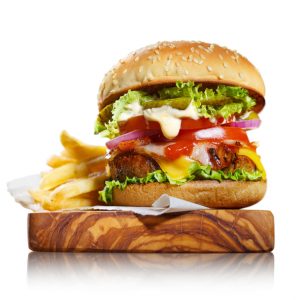 As frequent business travellers, we should aspire to eat well on the go.  Many people started 2020, with Veganuary, the pledge to be vegan for the first month of the year.  Eating a vegetable-based diet should be a good thing for the planet and our health, but the offerings are mixed.

There is an emerging awareness of the desire to eat ethically; organic, Fairtrade, vegetarian and plant-based foods are an important driver for our choice of menu.  This trend resulted in one in five of new supermarket products in 2019 being vegan.   Is the vegan option always the healthy option? Not necessarily.  Every burger or pasty outlet now has a vegan equivalent, possibly an improvement on the meaty version but often still ultra-processed and salty.

I took a closer look at some vegan foods on offer for those of us on the move.  My seal of approval requires a lunch item to be around 400 kcal, plenty of protein and dietary fibre and low in sugar and salt.  In the UK, the NHS recommends around 2000 kcal a day for adults and a limit of 6 g salt per day.

While sandwiches are often wholegrain and wholesome, it’s easier to fit a nugget shaped patty into a wrap, and these are extremely popular.  Greggs has a Mexican bean and sweet potato wrap which ticks most boxes, at 452 kcal, but 23 g sugar is unexpected and 1.7 g salt is a little high.  McDonald’s has a spicy veggie wrap, using a split pea and rice-based patty, it is a lighter meal with 364 kcal and 1.2 g salt; an accompanying serve of fries would ruin the healthy credentials.  Subway’s Vegan and Garlic Aioli Wrap has 728 kcal and 3.5 g salt, a very substantial meal.  It’s worth checking the small print to see exactly what we are eating and think how it fits into our daily allowance.

There is a move to create vegan foods in the image of popular meat-based items.  Greggs as seen spectacular demand for the vegan sausage roll.  It has slightly fewer kcals than the meat-based product, at 312 kcals, and slightly more salt, 1.9 g compared with 1.6 g.  It is reasonably priced and tasty, but 1.9 g salt is high for a small food item. The Subway Vegan Meatless Meatball Marinara Melt has lots of fibre, looks delicious, but 2.4 g salt is again very high.

Traditional plant-based diets include whole grains, nuts, fruit, vegetables and raw oils, which are great for our gut microbiome, and provides antioxidants and dietary fibre often lacking in an urban diet.  The vegan diet needs supplementing with Vitamin B12, which is present in artificially fortified foods or animal products. Without the presence of meat or dairy in the diet, vegan diets are often low in iron and calcium.

At least 500 businesses took part in vegan January 2019 and over 200 new vegan products and menus were launched.  The majority of Veganuary participants listed their health as the main reason for pursuing the vegan diet, followed by concern for animals and in third place, concern for the environment.   It isn’t always possible to find the most nutritious vegan foods when we are travelling, but making informed choices and avoiding or limiting our intake of ultra-processed foods is a good start.